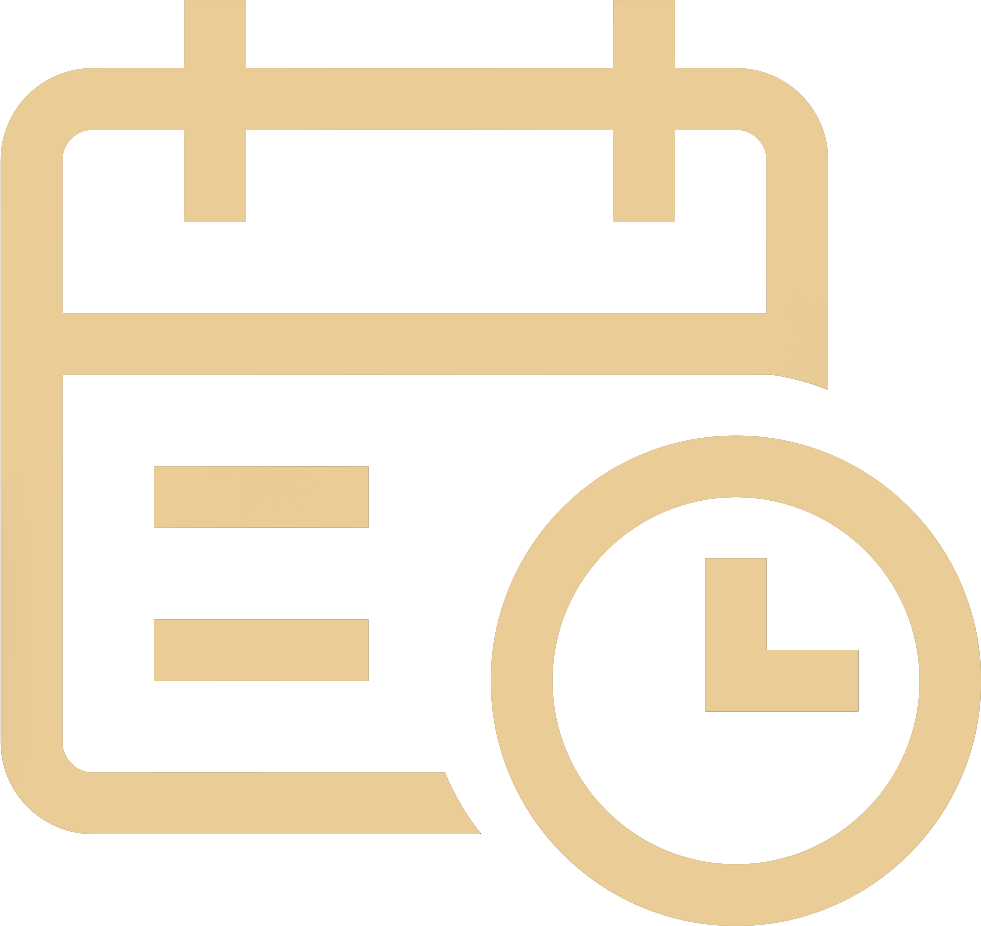 There are nine refuges operating on Olympus to date, meeting the needs of visitors, hikers, walkers, climbers and mountaineers on annual basis. Additionally, there are six more refuges, called necessity refuges, at pivotal points along the main routes to the peaks of Mount Olympus.

Ιt belongs to the  Hellenic Federation of Mountaineering & Climbing and it is situated at an altitude of 2.060 m, at the location “Balkoni”. The refuge was built in 1930 and it is used as a woodcutters hut ever since 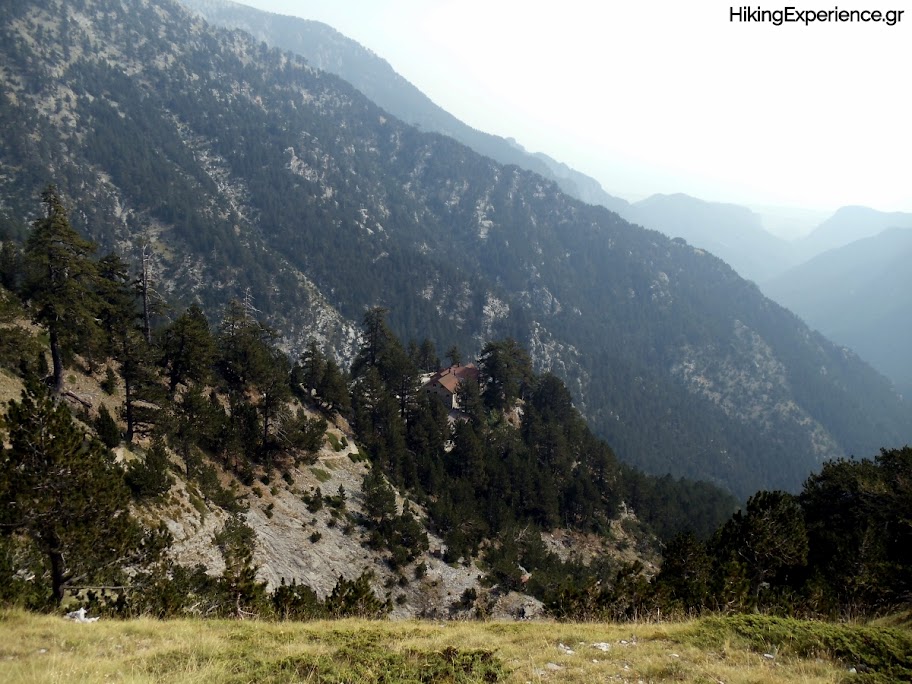 It operates as a mountain shelter since the 1950’s whereas currently it constitutes the second largest shelter in our country, as a result of many years of effort not only on the side of the Hellenic Federation of Mountaineering & Climbing but mostly on the side of Kostas Zolotas, keeper of the shelter for more than 50 years. It sleeps 110 people and it provides a fully equipped kitchen, restaurant, toilets and bathrooms. It also provides rescue services, and a heliport.
It operates from the mid of May to the end of October.

It was named after Joseph (Giosos) Apostolidis, who is responsible for the establishment of many new routes leading to the Plateau of Muses. Giosos Apostolides died after falling from Mytikas Louki on May 4th 1964. The monument built in the honor of Giosos Apostolides lies a few meters from the refuge. 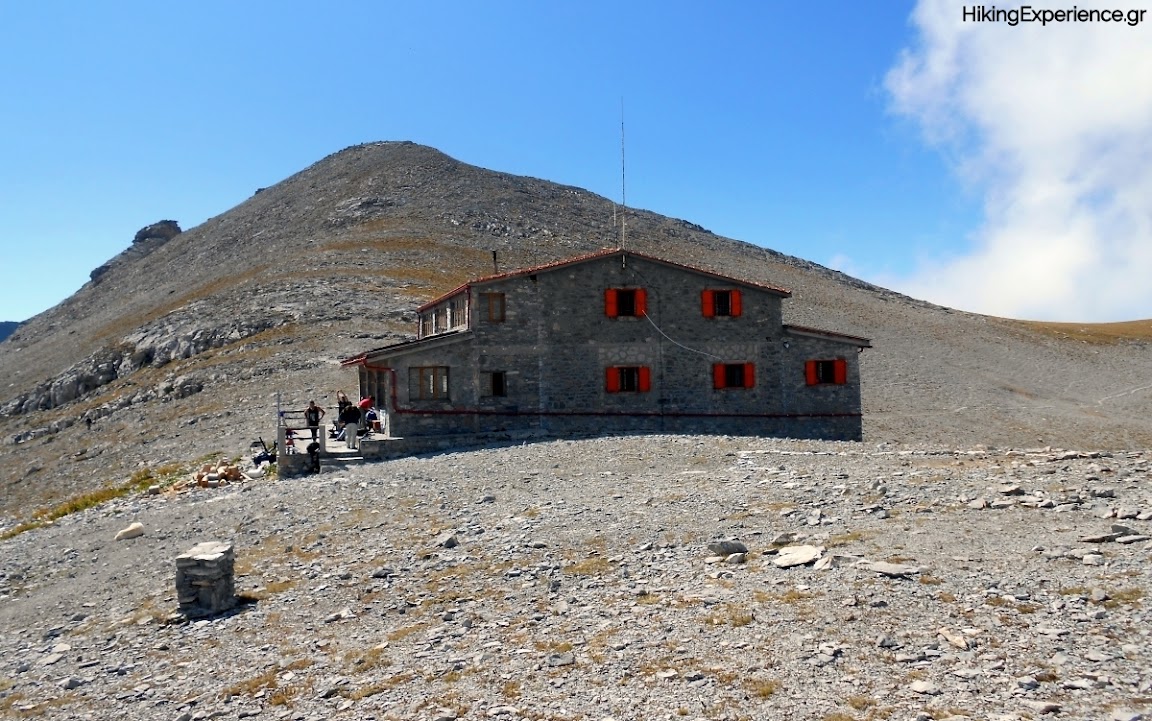 The refuge is located at an altitude of 2.697 m. in the gap between the peaks of Tumba and Profitis Ilias and it is a property of the Hellenic Hiking Association of Thessaloniki. It sleeps 80 people and it has a fully equipped kitchen, restaurant and toilets. It operates from the beginning of June to the end of October, and the rest of the year following consultation with the operators. In the winter, the shelter’s antechamber remains opened at all times as a necessity refuge.

It is located at the eastern edge of Mouson Plateau at an altitude of 2.648 m and it has been named after Christos Kakkalos, who made the first recorded ascent to Mytikas, the highest peak of Olympus, on 2 August, 1913. Christos Kakallos led the expedition of the Swiss Daniel Baud-Bovy and Fred Boissonnas. 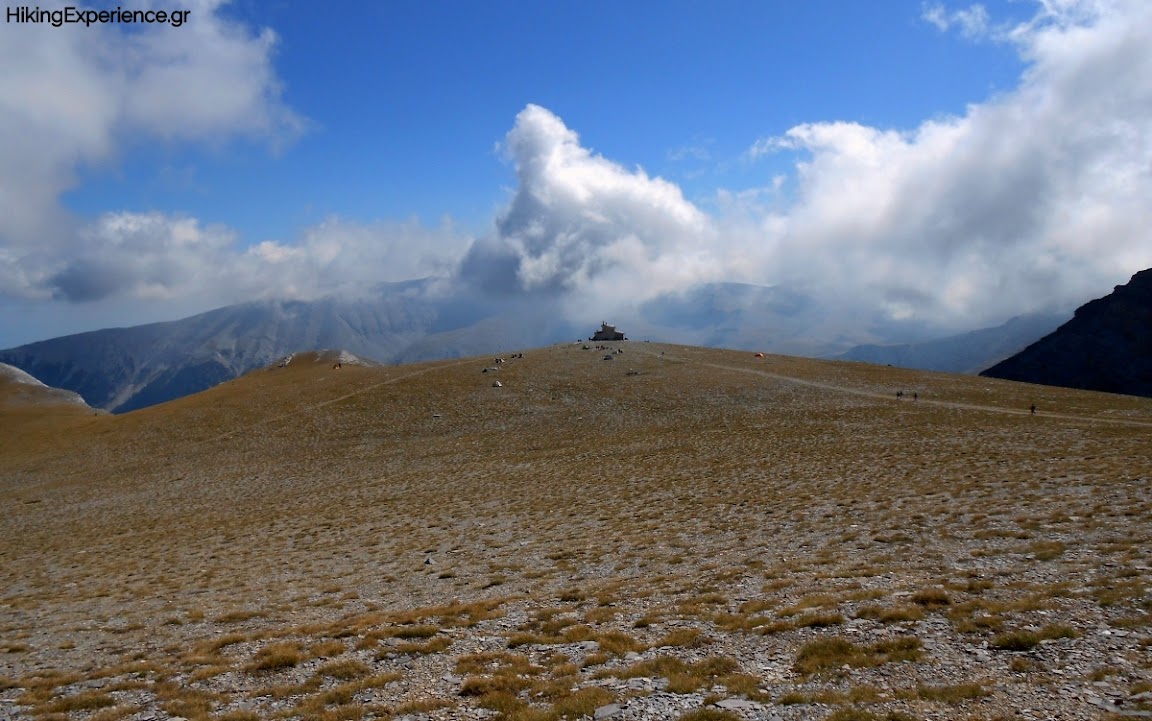 It sleeps 23 people and operates from the end of May to the end of October, as well as in the winter (from December to April).
Contact number: 6937361689 (Michalis Styllas)
Website: olympus-climbing.gr

It is built in a wonderful forest of beech trees and perennial bushes at an altitude of 1.950 m., and it is operated by Hellenic Rescue Team. It has can accommodate up to 90 people, and it has been recently renovated thanks to the voluntary contribution of HRT members. The shelter constitutes a base especially for winter ascents, since it remains opened all year long. For the summer months there are available new climbing routes to a near rock, giving climbers the opportunity to exercise their favorite sport. 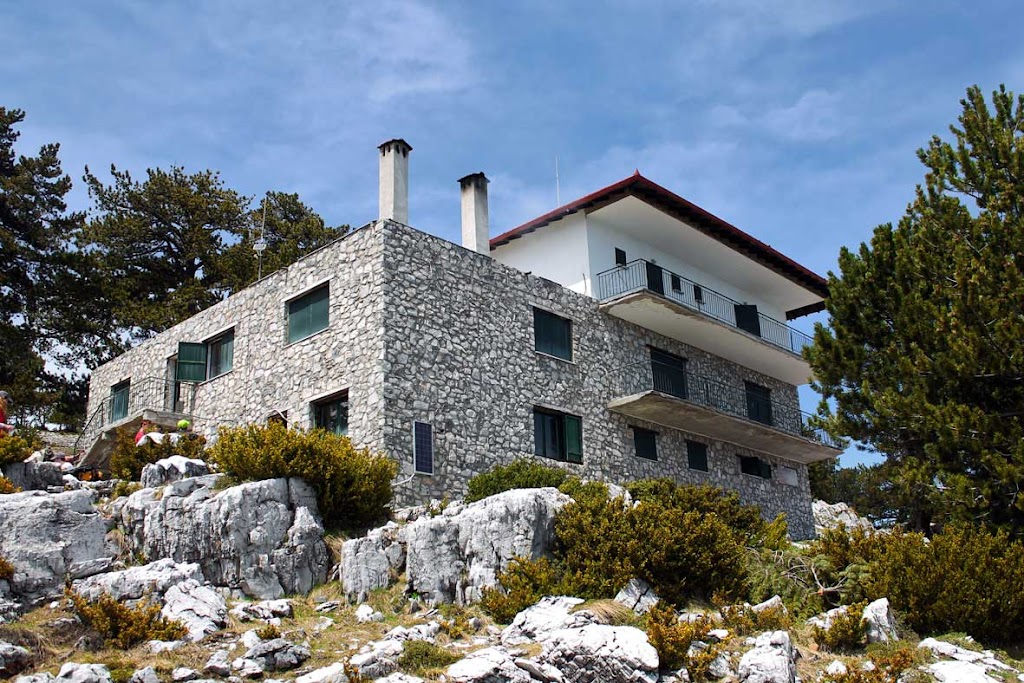 Those who are interested may gather more information regarding Petrostrouga Refuge on Mount Olympus and make reservations by contacting the Secretariat of the Central Administration of HRT at number 2310-310649 or by email at inform@hrt.org.gr, You may also contact shelter’s administrators, Nektarios Parmakis (6977 246350) and Tilemachos Aigyptiadis (6948 821513).

It is located on the south side of Mount Olympus at an altitude of 1.800 m., above Mavratza Gorge. It may accommodate 25 people. The refuge is located within the Mountain Ski Warfare Training Center (ΚΕΟΑΧ) of Hellenic Army Special Forces. Therefore, it is required to notify the military base in time in case of upcoming reservations, by contacting number 2493062163 or 2493023467 Hellenic Skiing and Mountaineering Club of Elassona. 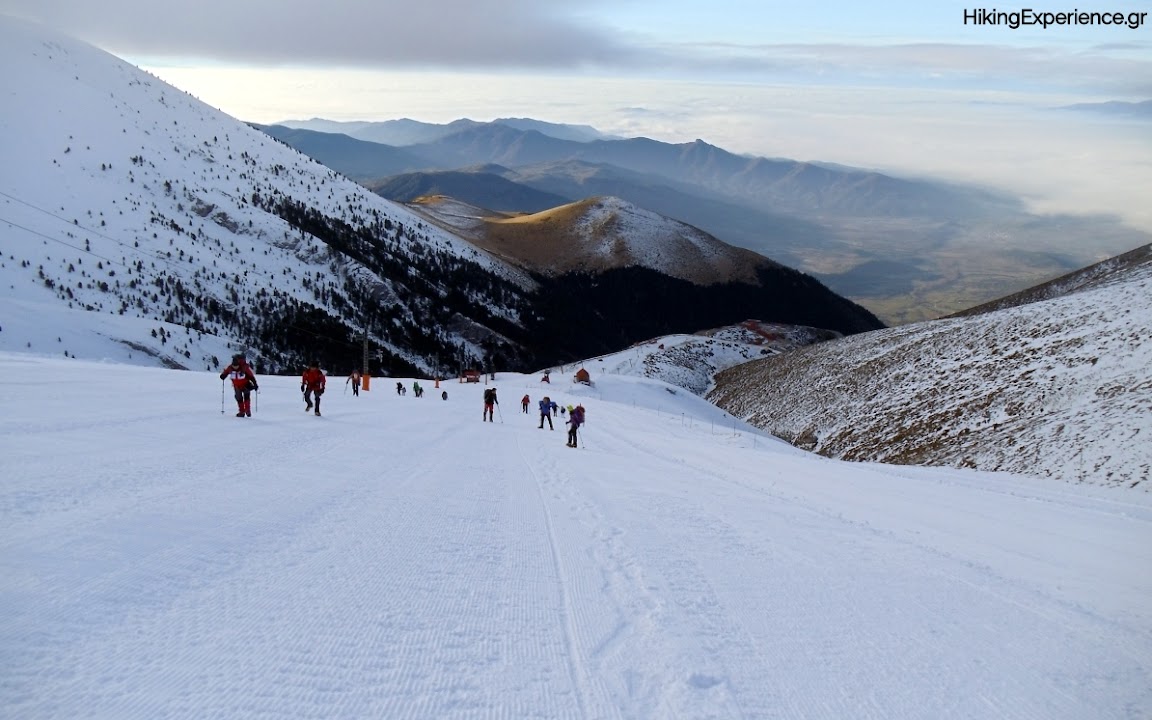 The refuge constitutes an ideal base for mountaeineering ski towards Megali Gourna and the peaks of Kalogeros, Agios Antonios and Skolios. No blankets are available at the refuge.

Brand new refuge with a capacity for 16 people, at the location Koromilies Leptokaryas, built at an altitude of 950 m. The access to the shelter is facilitated through a dirt road. No equipped kitchen and permanent keeper available. (Information: Municipality of Eastern Olympus, Contact Number: 2352031242).

It is located at an altitude of 950 m., with a capacity for 20 people and excellent view to the northern side and the steep slopes of the mountain. It serves as a base for many hiking trails, towards the lower parts of the mountain and the peaks. 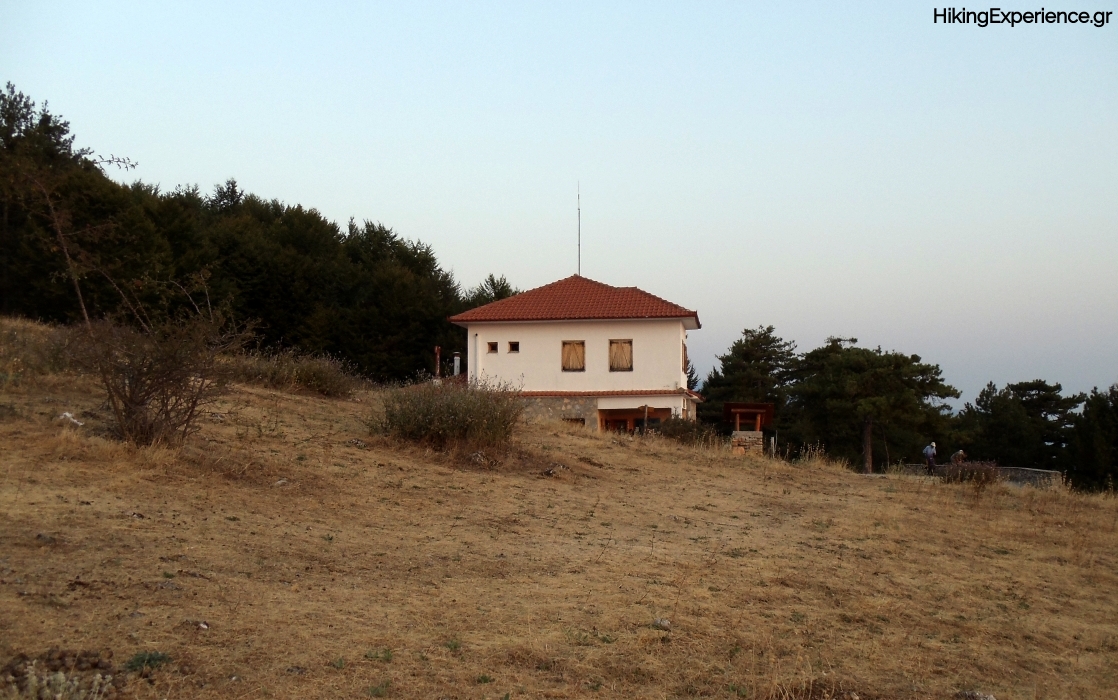 Apart from hiking trails, there are also mountain bike trails and sport climbing routes. It operates every weekend all year long. (Information: Management Agency of Olympus National Park, Contact Number: 2352083000 and Municipality of Dion-Olympus, Contact Number: 2351351000). Contact Number of the Keeper: 6978278548

Refuge D, “Stavros”, or “Dimitrios Boundolas”
Located at “Stavros”, at an altitude of 950 m, along the way from Litochoro to Prionia. It has been named after Dimitrios Boundolas, one of the best Greek alpinists of the 1980’s, who was killed in an avalanche in October 1985 at Annapurna South of Himalayan. 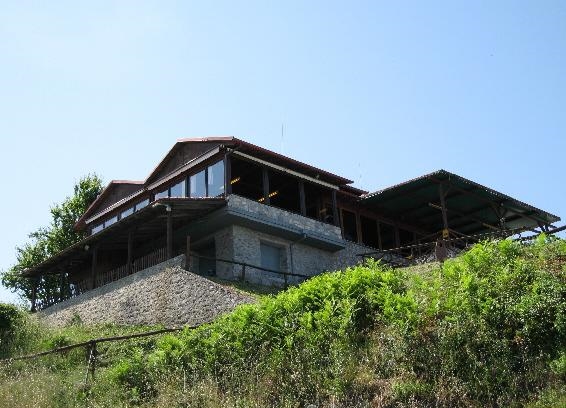 It has a capacity for 30 people and it provides a fully equipped kitchen and restaurant. It offers an amazing view to the plain of Pieria and the sea. Throughout the summer months, it is open all the time as well as on holidays and weekends all year long. The surrounding landscape is ideal as a take off point for hang-gliding.
Contact Number: 2352084100
Website: eosthessalonikis.gr

Koromilia Dion Refuge
This new refuge with a view to Thermaikos Golf is located at an altitude of approximately 1000m. Access to the refuge is facilitated through a forest road from Agios Konstantinos as well as through the path that crosses Orlia Gorge. Petrostrouga Refuge as well as Mouson Plateau are also easily accessible from the refuge. The refuge also facilitates canyoning in Orlia Canyon. 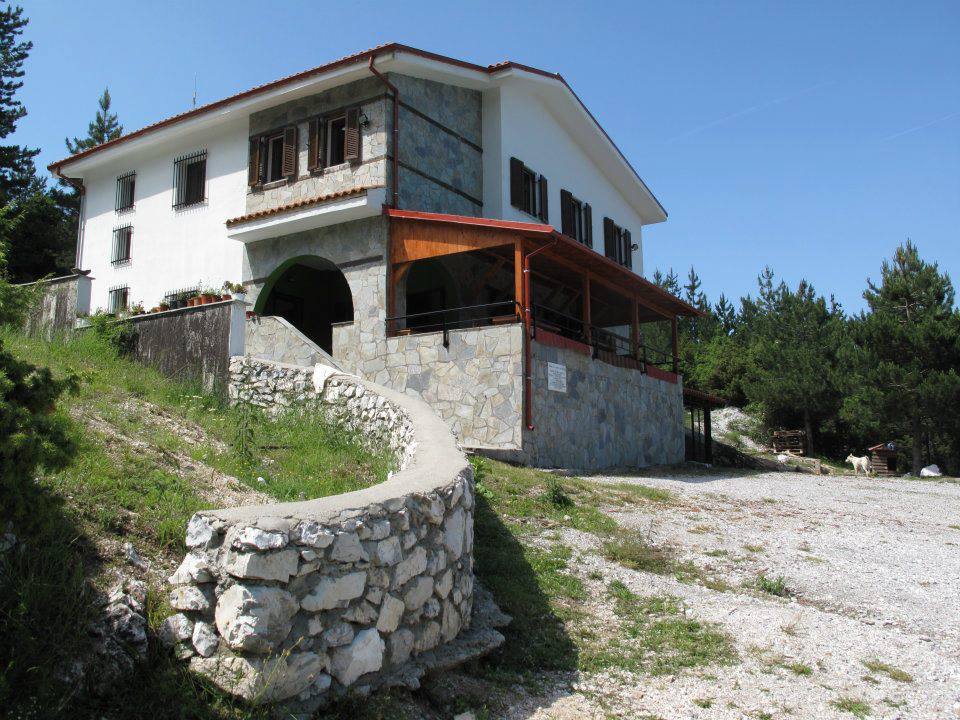 This Refuge is located at an altitude of 1.417 m and has a capacity for 18 beds. It is equipped with a fireplace, a wood-burning stove and a kitchen. Access by car is facilitated from Agios Ioannis in Litochoro or from P. Leptokarya (dirt road 19.5 or 22.5 km.). The refuge is a property of the Hellenic Hiking Association in Leptokarya. 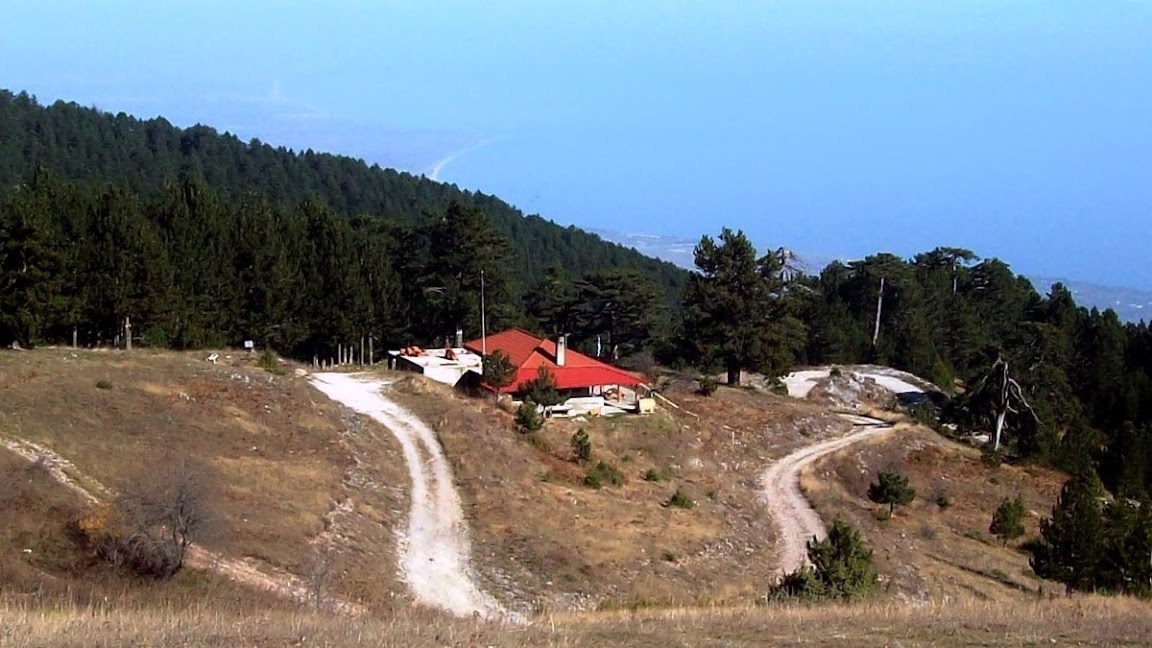 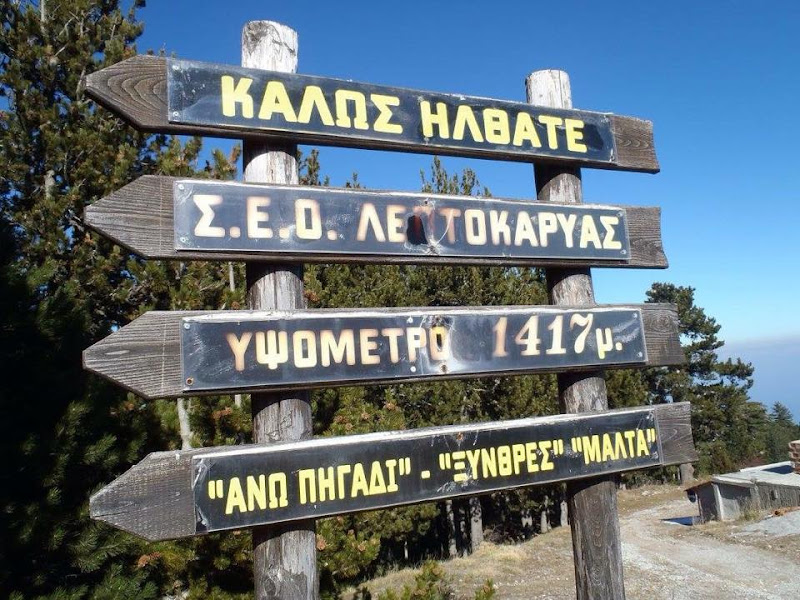 Starting from “Vrisopoules”, where ΚΕΟΑΧ (Hellenic Special Forces Training Camp) is located, and after 2 ½ hours of intense ascent to an altitude of 2.450 m stands the necessity refuge “Kostas Migkotsidis”. This refuge was built in 1981 by 735-ΔΣΕ (Military Works Directorate) of EU-OHQ (1ης Στρατιάς) and on the 1st of April 2006 it was renamed to “RESERVE SERGEANT (NAVY) MIGKOTSIDIS KOSTANTINOS REFUGE” in the memory of the unfortunate climber and commando who lost his life at Kazania, Olympus, on 2 February 2006. This small necessity refuge is equipped with nine military dormitories, a heating stove, wireless, two small benches, and some stools. 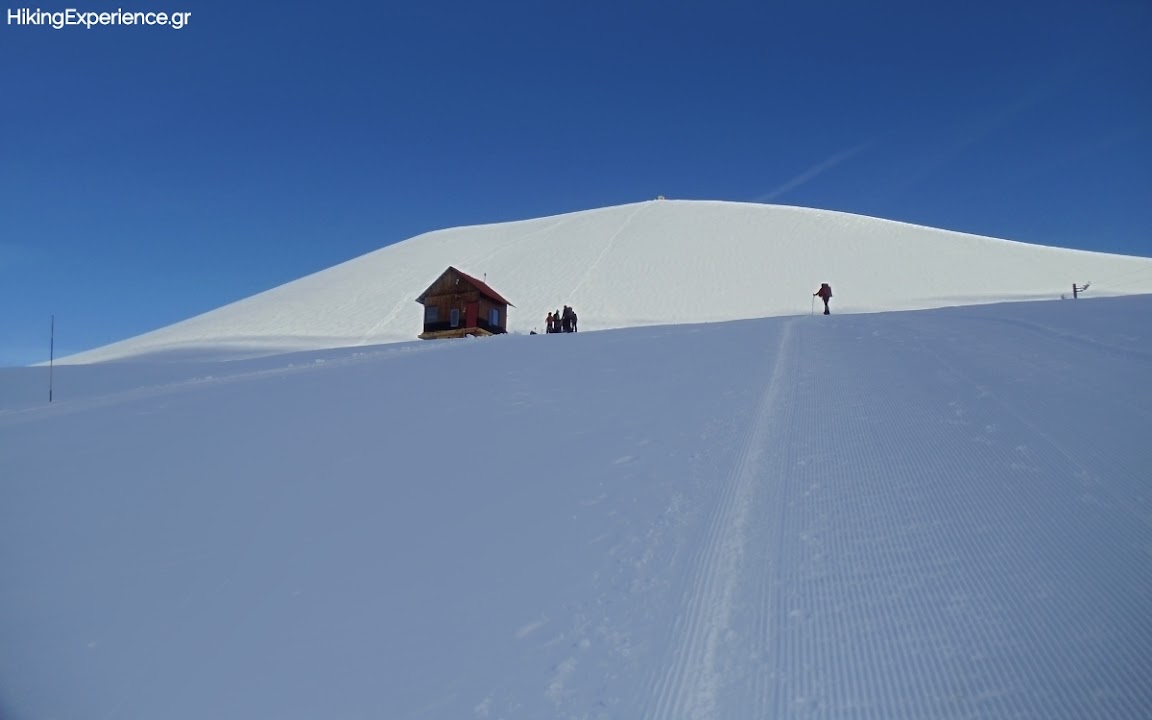 In 1961 the School of Physics and Mathematical Science of the University of Thessaloniki founded this building on the peak Agios Antonios, to operate as a Scientific Center – Weather Station, for the study of Olympus climate and for weather observations.

The building operated only in the summers and it could be used as a necessity refuge in case of an emergency. Foundation excavations brought to light random pieces of marble sculptures and stone slabs, remains of pottery, copper coins as well as a golden coin. The station operated for 18 years. Today it serves as a necessity refuge. It is equipped with first aid supplies by the Hellenic Rescue Team. 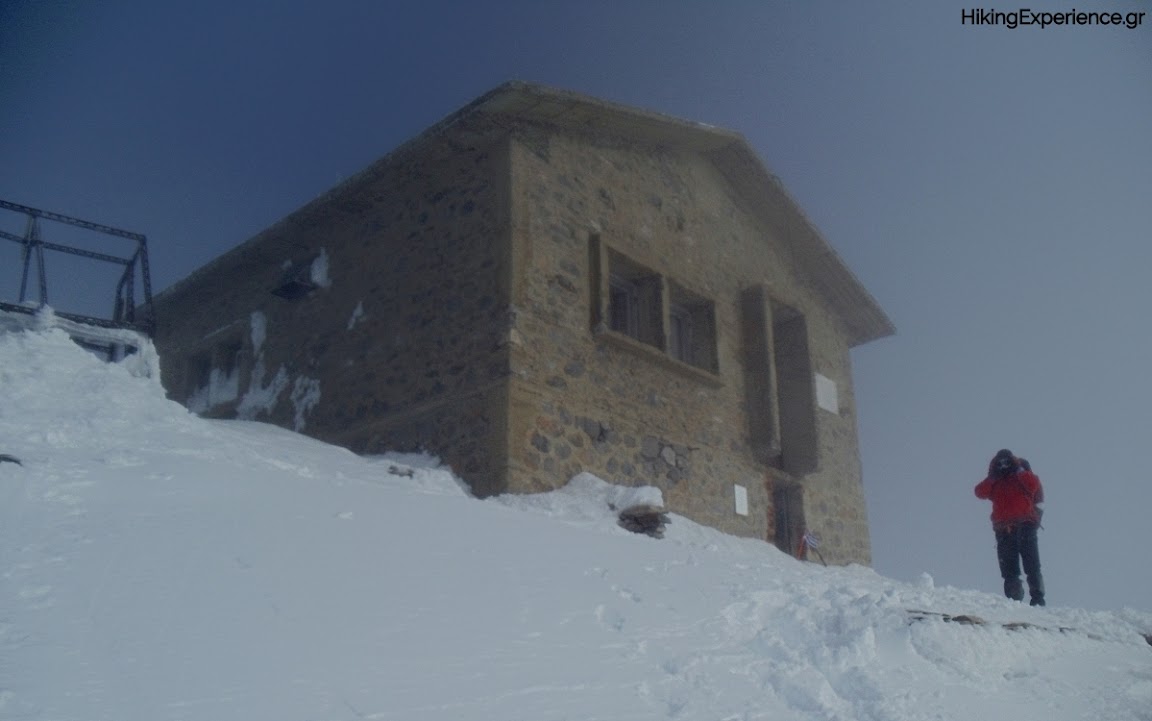 It is located at “Megali Gourna”, at an altitude of 2.550 m along the route of the path Ε4, Kokkinopilos-Skala. 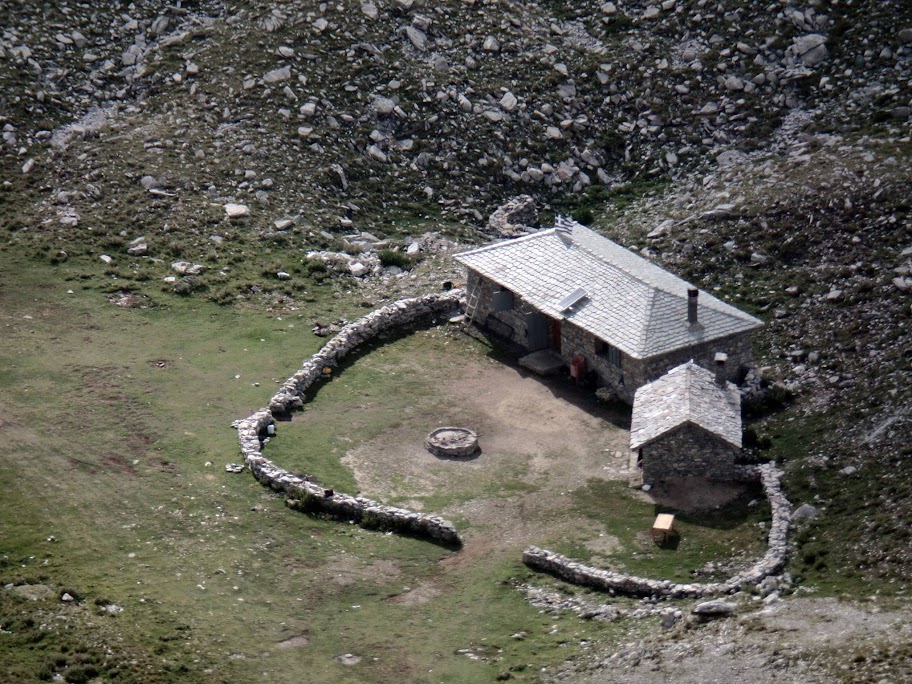 At the location “Livadaki” (2.100 m), just below “Simaioforos” peak (2.382 m) stands a small necessity refuge available for an overnight stay only after consultation with the Hellenic Mountaineering Club of Litochoro . The refuge is equipped with fireplace and may accommodate maximum 5 people. Water is taken from an outdoor rainwater tank that is not always clean. The refuge was founded in 1955 by the Forest Department. 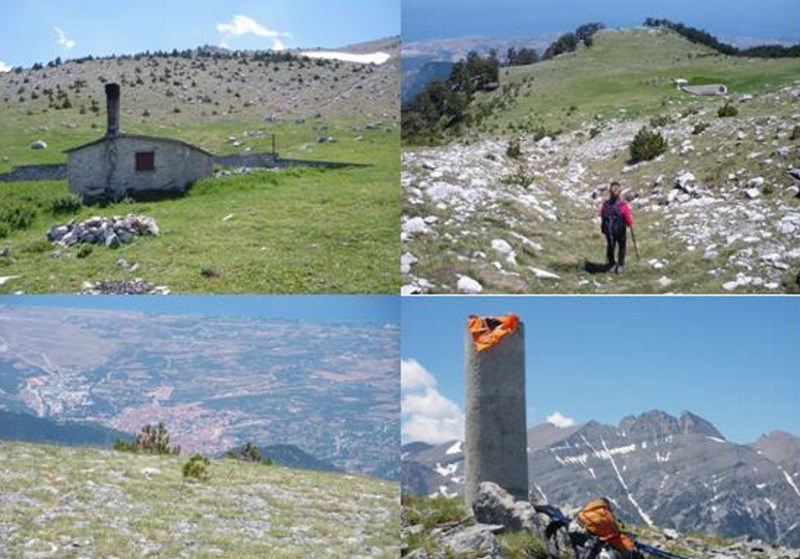 At the location “Salatoura” (1.850 m.), over “Mavratza” Gorge, stands an old fire-lookout tower with a capacity for six people. The abandoned fire-lookout tower at Salatoura, Olympos, was transferred to the Hellenic Resque Team by the Fire Department of Elassona and the Forest Department of Larisa for the purpose of its reconstruction and reopening as a fire-lookout tower and necessity refuge. It is located on an edge leading to “Kitros” peak (2.416 m.). The refuge is equipped with a kitchen, toilets, water, heating, telephone. Information: Skiing Mountaineering Club of Elassona
Information: Skiing Mountaineering Club of Elassona 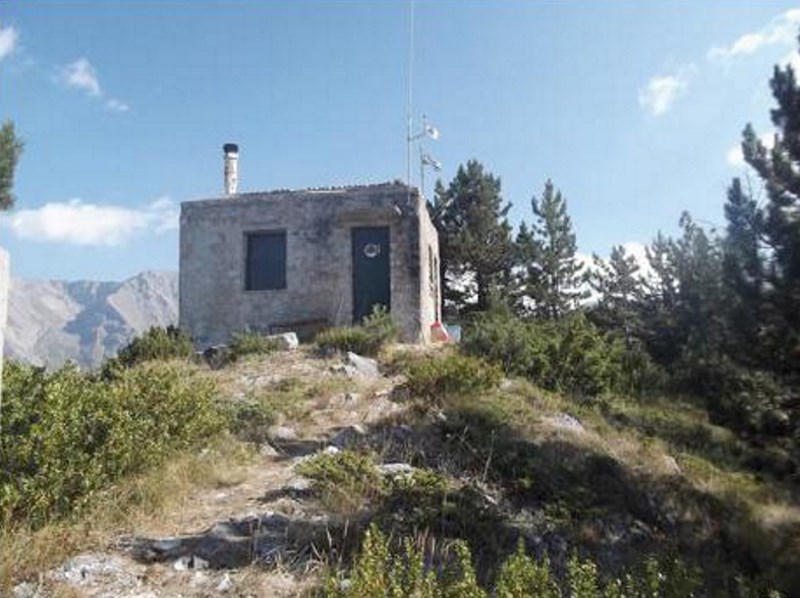